High on the southern slope of the hill, the exploration of Zone 5 has provided substantial remains of large Building E, destroyed by fire early during the LM IIIB period. It is separated from the main building (CD) on the top of the hill by a large open area, and to the south it is fringed by a man-built terrace delimited by large retaining walls. As is usual in Minoan architecture, Building E was adapted to the natural topography, with a succession of terraces and the recurrent integration of bedrock into the walls. It is composed of twelve covered spaces (spaces 5.1 to 5.9 and spaces 5.11 to 5.13), while to the north the large open area was used for dumping materials connected to specific events implying the consumption of food and drink, especially in large pit FE081, and the dumping, storage and preparation of building materials (perhaps for recycling), some of it coming from cleaning operations in Building CD. 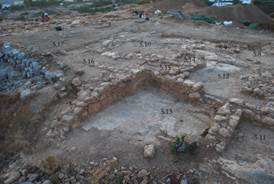 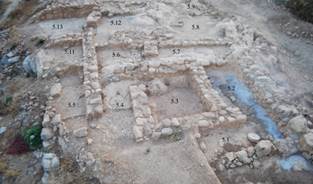 Several points of entry into Building E were identified to the south, from the terrace towards spaces 5.1, 5.4 and 5.5. Because of erosion and a change in level in this part of the hill, we did not manage to identify an entrance on the west side. The same goes for the north side where erosion has eradicated walls down to bedrock. Future exploration may still reveal an additional access from the east but most probably Building E was mainly accessed from the south, from the present site entrance along the slope which leads to the terrace. The finds from Building E shed light on domestic life at Sissi during the LM IIIA2/B period. A variety of containers – such as cups or jugs –, beehive fragments, ground tools used notably for the processing of food, the leftovers of meals – animal bones and a large number of shells – were retrieved, together with several copper alloy tools generally used in carpentry. A bath-tub larnax decorated with an octopus motif as well as a snake-tube (a stand decorated with wavy plastic handles not unlike the shape of a snake) and a rhyton were found fallen on top of a series of cooking vessels in space 5.13, suggestive of perhaps a shrine on the upper floor and a kitchen on the ground floor.

Tripod stone mortar resting upside-down in space 5.8, with, between two of its legs, the mortar (© Sissi Project)

The architecture of Building E is remarkable in the way the builders ingeniously adapted the edifice to the natural configuration of the hill. It was constructed in distinct terraces following the bedrock slope which itself was used as floor in several of the rooms (spaces 5.4, 5.6, 5.7, 5.8 and 5.9), though in some cases it was cut in order to offer a flat regular surface (space 5.13). In space 5.2, the bedrock was especially cut in order to serve as a support for a large rubble wall and, east of spaces 5.7 and 5.8, a foundation trench for a wall which also grazed the bedrock is still visible. The preliminary study of the architectural remains suggests that most walls of Building E belong to a single architectural program. Exceptions concern some subdivisions of rooms which happened at a later stage during the history of the building (e.g. the wall separating spaces 5.2 and 5.3, once a single architectural space) and the reduction in width of several accesses (between spaces 5.2 and 5.3 and 5.2 and 5.6). The successive floor levels in several of the rooms (5.2 and 5.8, but no doubt more testing would produce more examples) illustrate the long occupation of the building which was destroyed by a violent fire destruction most probably early during the LM IIIB period (preliminary date). It is very likely that the inhabitants left the building in a hurry, as the discovery of a large lead vessel hidden under the pebble floor in the south-west corner of space 5.8 and the metal tools suggest.

At several spots beneath Building E tests revealed the presence of earlier occupation of the hill. These go back to the EM II period as far as isolated ceramic fragments are concerned, but an EM III/MM I deposit was found in close connection with a red earthen floor in the open area north of Building E, cut by the southern façade of Building CD. In fact, the early remains of occupation mainly come from the northern open area. In addition to these EM III/MM I sherds associated with architectural remains, several MM II deposits were found, indicating the presence early onwards of an open area, but also of substantial architectural remains.

Indeed, immediately north of space 5.13, the remains of two MM II rooms were discovered, which had been partly demolished by the construction of Building E. The floor of the easternmost space, 5.18, was covered with a white plaster which originally also covered the rubble walls. Several cups were found fallen on the floor, together with a large fragment of a stone lid. The westernmost room, 5.19, was shaped to the north by the cutting of the bedrock, with also formed its floor. Floor and walls were covered with a red and blue painted plaster. Several vases were found in the destruction layer here, partly interfered with to the south by the construction of the north wall of space 5.13, and to the west by the construction of the main terrace wall bordering the open area to the west. Interestingly, it appears that the floor of space 5.13 on which were found the remains of the early LM IIIB fire destruction initially belonged to the MM II space 5.19. The building program of the Late Bronze Age period, disturbing the MM II remains, was very likely set in motion already in the Neopalatial period, as suggested by the connection between the walls of Building E with the main western terrace wall. Indeed, this wall itself covers a LM I cups deposit, providing for a construction date somewhere after the MM II destruction of spaces 5.18 and 5.19 and the Neopalatial deposit.