In 2016, architectural engineers Eleftheria Zografou, Marilena Pateraki and Christos Koutsaftis surveyed the architectural remains that had been uncovered since the last architectural survey had taken place in 2013 under the direction of Aphroditi Chalkidi. More specifically, they focused on the northeast, southwest and southeast parts of the ceremonial Building F in Zone 6, covering the spaces located around the central court. This year’s survey also gathered data which will be used to update the drawings of the east part of Building CD in Zones 4 and 13 and the south part of the building in Zone 9. 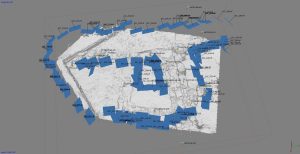 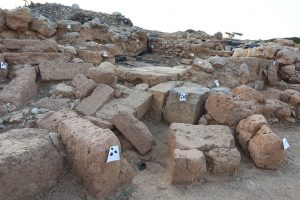 Close range Photogrammetry proved to be a useful approach to the task. DSLR cameras were used to shoot multiple overlapping photographs of the remains from many directions. In this stage, care had to be taken to avoid shadows, as these would compromise the software’s ability to match points in the different photos. Numerous targets were placed on appropriate points of the objects and were surveyed by the topographer to provide control points for the accurate georeferencing of the model.

The software used, Agisoft Photoscan professional, allowed for the breaking up of complex subjects into smaller component parts, which saved computing time. Using this method allowed to generate orthophotos of the remains soon enough to check them on site and take additional photographs if required before proceeding to draw the final architectural plans and elevations.